Commemorated on Bight Tuesday after Pascha 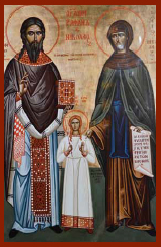 On the island of Mytilene (Lesbos in ancient times), near the village of Therme, the villagers had a custom of ascending a certain hill on this day to celebrate the Divine Liturgy in the ruins of a small chapel, although no one knew whence the tradition sprang. In the year 1959, certain villagers began seeing persons who spoke to them, first in dreams, then awake, both by day and by night. Through these wondrous appearances, which were given to many people independently, the holy Martyrs Raphael, Archimandrite of the ancient monastery, and Nicholas, his deacon, together with other Saints who had been martyred on the island, told the villagers the whole account of their martyrdom, which had taken place at the hands of the Moslem Turks ten years after the fall of Constantinople, in 1463. The twelve-year-old Irene had been tortured, then burned alive in a large earthenware jar in the presence of her parents. On Tuesday of Renewal Week, Saint Raphael had been tied to a tree and his head sawn off through his jaws; Saint Nicholas had died at the sight of this. Although the feast is celebrated today because it is the day of their martyrdom, through the appearances of the Saints as living persons five hundred years after their martyrdom, it is also a singular testimony to the Resurrection of Christ. Source: Boston: Holy Transfiguration Monastery END_OF_DOCUMENT_TOKEN_TO_BE_REPLACED

Saint Seraphim was born in the town of Kursk in 1759. From tender childhood he was under the protection of the most holy Mother of God, who, when he was nine years old, appeared to him in a vision, and through her icon of Kursk, healed him from a grave sickness from which he had not been expected to recover. At the age of nineteen he entered the monastery of Sarov, where he amazed all with his obedience, his lofty asceticism, and his great humility. In 1780 the Saint was stricken witha sickness which he  manfully endured for three years, until our Lady the Theotokos healed him, appearing to him with the Apostles Peter and John. He was tonsured a monk in 1786, being named for the holy Hieromartyr Seraphim, Bishop of Phanarion (Dec. 4), and was ordained deacon a year later. In his unquenchable love for God, he continually added labours to labours, increasing in virtue and prayer with titan strides. Once, during the Divine Liturgy of Holy and Great Thursday, he was counted worthy of a vision of the Lord Jesus Christ, Who appeared encompassed by the heavenly hosts. After this dread vision, he gave himself over to greater labours. END_OF_DOCUMENT_TOKEN_TO_BE_REPLACED

Commemorated on Sunday before Palm Sunday

When Mary was only twelve years old, she left her parents and departed to Alexandria, where she lived a depraved life for seventeen years. Then, moved by curiosity, she went with many pilgrims to Jerusalem, that she might see the Exaltation of the venerable Cross. Even in the Holy City she gave herself over to every kind of licentiousness and drew many into the depth of perdition. Desiring to go into the church on the day of the Exaltation of the Cross, time and again she perceived a certain invisible power preventing her entrance, whereas the multitude of people about her entered unhindered. END_OF_DOCUMENT_TOKEN_TO_BE_REPLACED